What were the Viking’s Jewelry Choices? 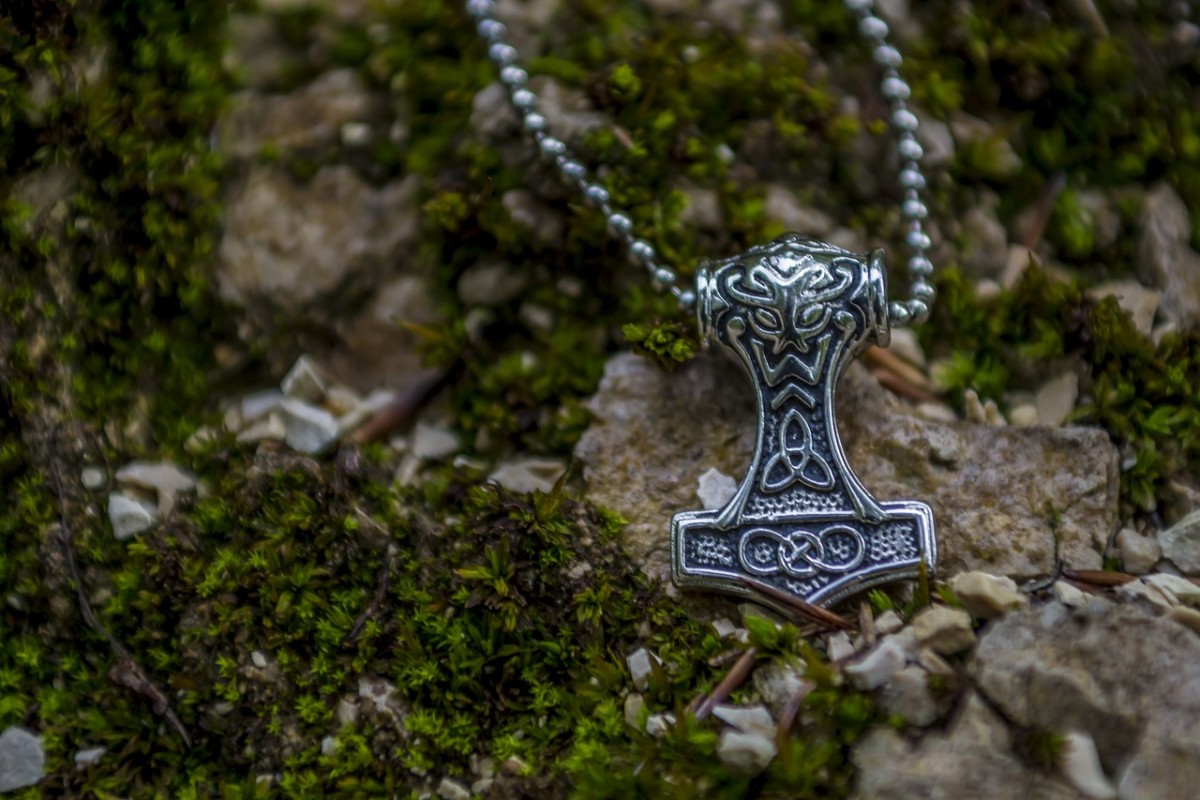 When one hears the term “Vikings,” they picture a warrior wearing a helmet with two horns and holding an axe, with a giant shield to combat plundering, but not wearing jewelry.  However, they have also created beautiful and complex jewelry, primarily out of bronze, gold, iron, and silver, as well as amber and resin.

Nordic jewelry dates from the early Viking period (about 800 AD) and has evolved through time as artistry has improved. In ancient Viking society, both men and women favored wearing several pieces of jewelry imprinted with symbols ranging from Norse mythology to Thor’s Hammer. Viking jewelry is generally divided into two types: clumsy and hefty, which can endure battle, and very agile, which is a sign of riches and rank.

Wealthy Vikings of the past used beautiful jewelry as a form of self-promotion or as a means of gift-giving to family and friends. Geometric patterns, plants and animals, and religious symbols like the wolf of Odin or Thor’s hammer are all popular design motifs. Brooches, bracelets, and rings are the most frequent pieces of jewelry. Ancient Vikings chose not to wear earrings, despite knowing about and stealing jewelry from individuals of other ethnic groups. 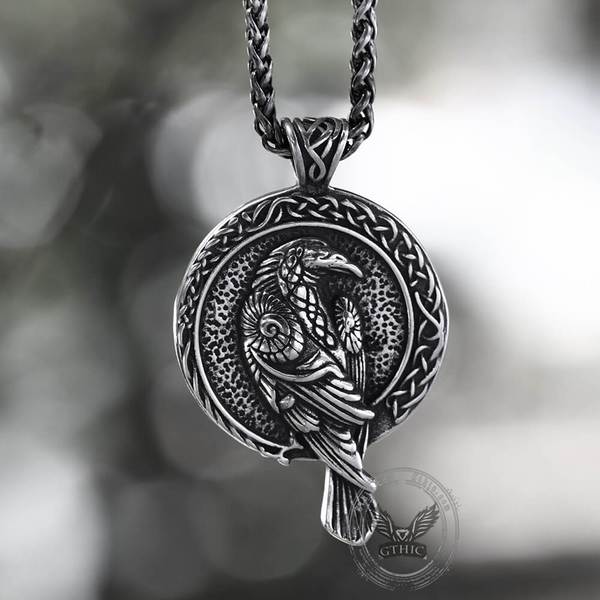 Viking Pendant with Raven and Triskele in Stainless Steel

Viking graves all across Europe have yielded copper, silver, gold, and amber jewelry. The most popular are silver and copper, processed into different forms using the dewaxing casting method. Animal horns, bones, and iron jewelry are worn by the poor. Surprisingly, the Vikings learned the art of glassmaking, and multi-colored glass beads have become fashionable among women. 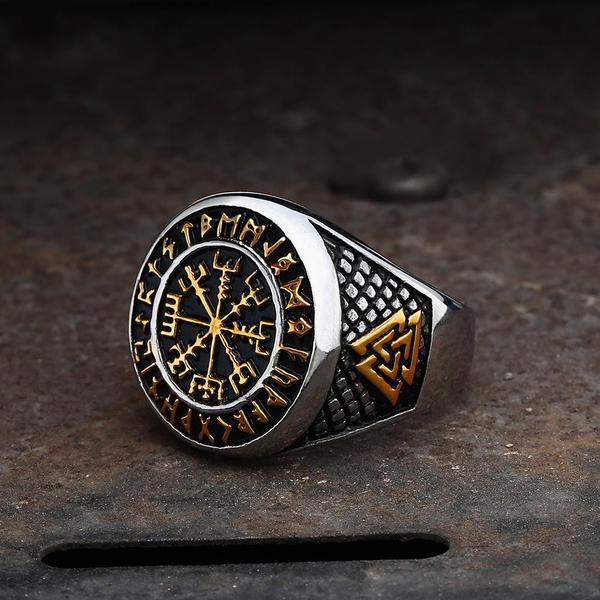 Every piece of Viking jewelry has its unique significance, as do the symbols and designs on the pieces. 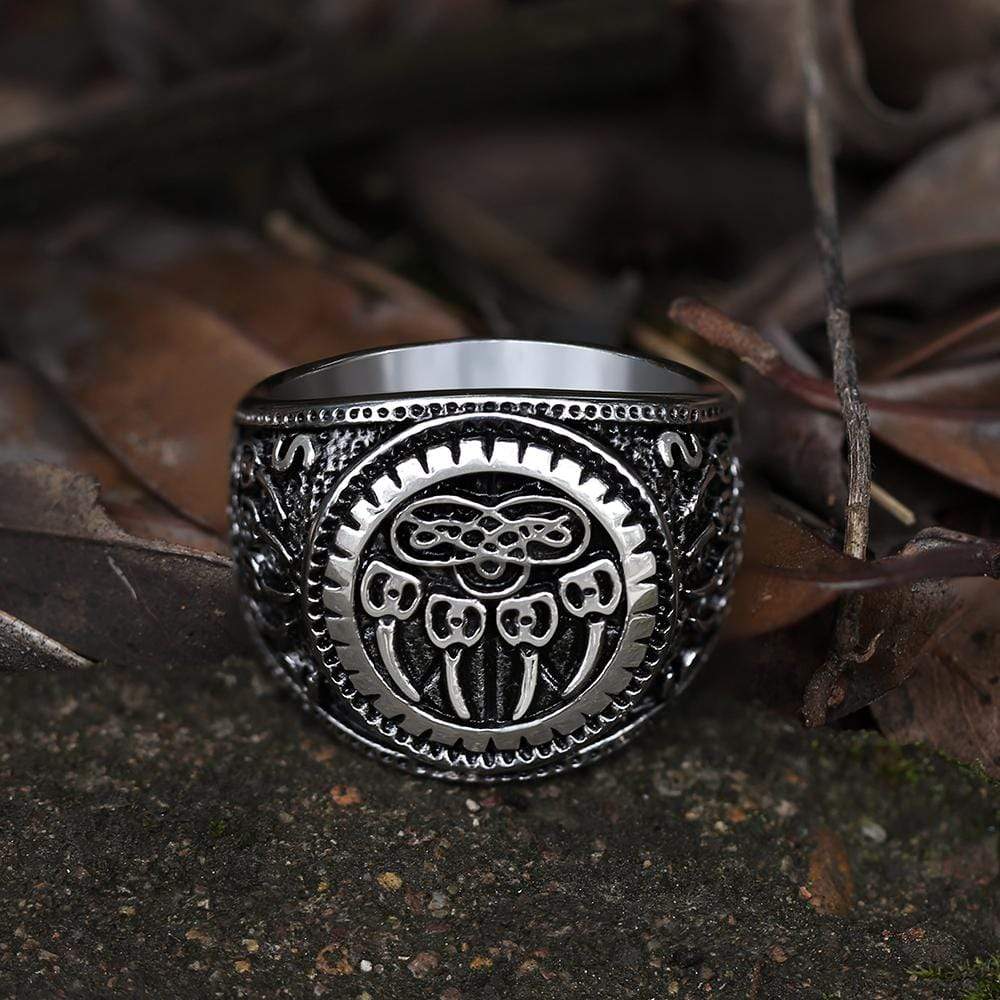 If you want to show off your Viking pride, this impressive ring is just what the doctor ordered. The Bear Claw design makes up from a series of 8 curved lines radiating out with two long ones that extend down into points at their ends creating an impression sure enough will draw attention – those who are worthy enough wear it! 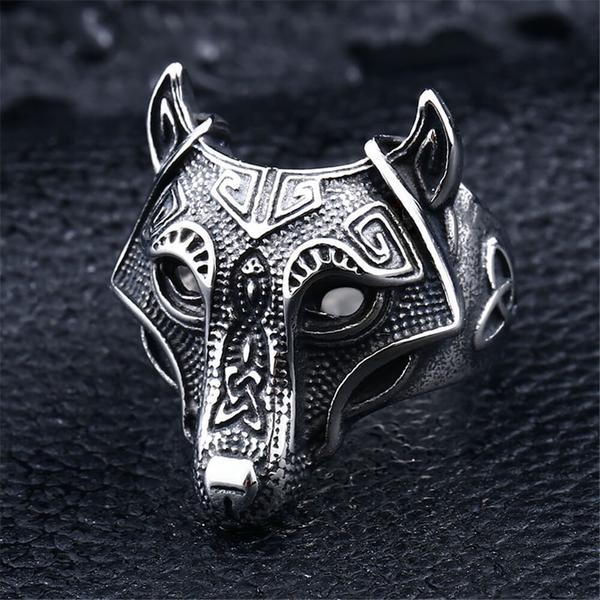 The aim of Viking jewelry, like other jewelry design ideas in other areas, is to highlight the wearer’s strength. This wolf ring is a testament to the Viking warrior’s potential to equal all gods in power.

Pendant of a Viking 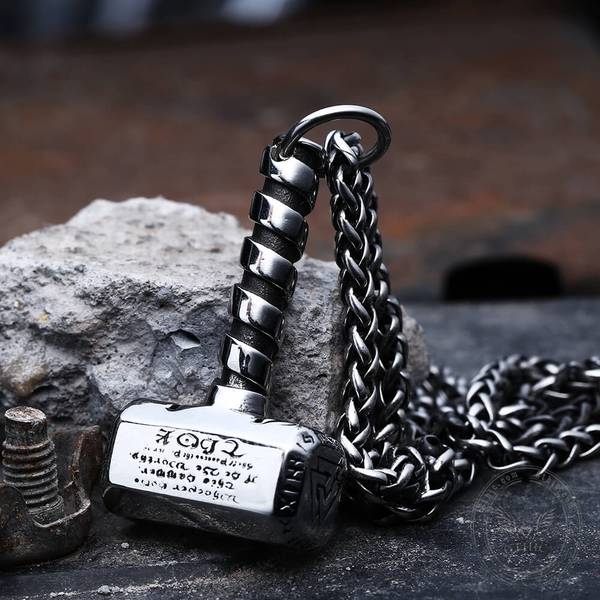 The most common pendant design is the thunder deity Thor’s hammer, which symbolizes thunder and lightning. These enigmatic Viking symbols may be found carved in the shape of pictures, text, and tales on runestones and weapons, as well as on jewelry. It includes images of animals, nature, and gods in addition to being created as abstract patterns. 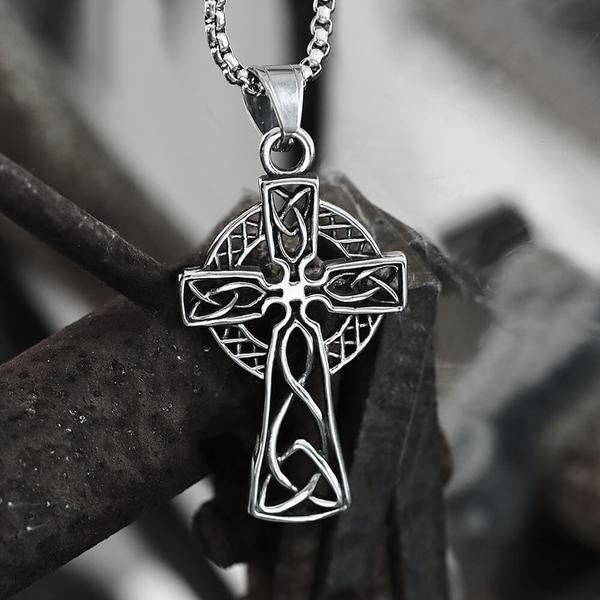 Certain researchers think that certain Viking jewelry may have religious significance as well. Religious motifs like Mjolnir (Thor’s Hammer), Valknuts, and Yggdrasil are etched on pendants found in numerous graves (Tree of Life). Vikings frequently buried jewels in their tombs, believing that riches would ensure a happy afterlife.

Bracelet and necklace with Viking symbols 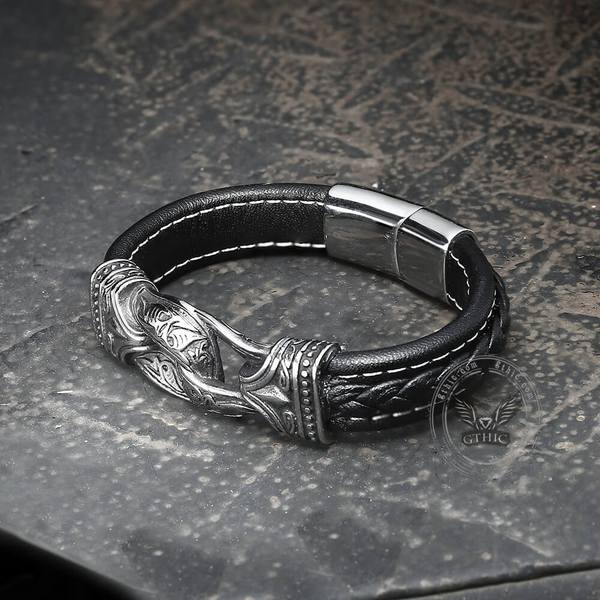 Vikings’ favorite pieces of jewelry are bracelets and necklaces. Norse jewelry was also utilized as money throughout the Viking period, in addition to being ornamental. When the Vikings wanted to pay a debt, they chopped off certain pieces of silver arm and neck decorations and paid as broken silver. This type of jewelry is known as “Huck Silver” because it eliminates carrying a wallet. As a result, merchants often have tiny scales with them. 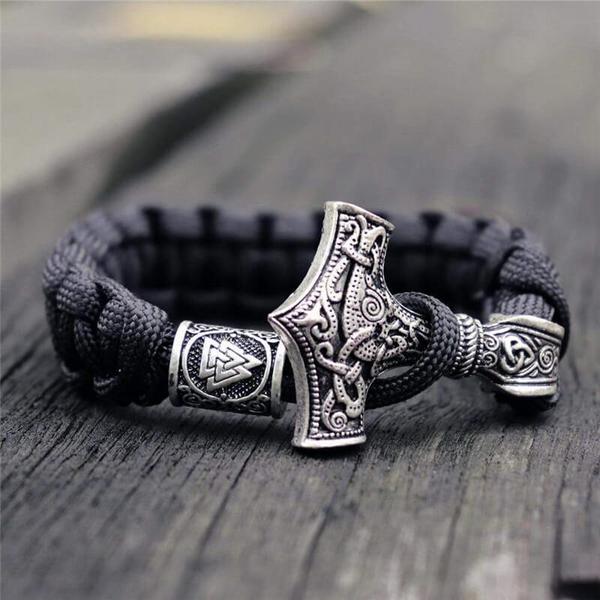 The Viking wristband is a decorative item worn by Viking males, and it is constructed of unique materials. It’s constructed of silver metal that’s been stolen. It is not only a sign of prestige for Viking pirates, but it also has decorative qualities. However, there are currently more materials available for Viking wristbands; stainless steel is widespread, the price is reasonable, and the bracelet is beautiful and durable; it is the best option for inexpensive jewelry.

The Vikings were well known for wearing ornaments and jewelry, and it is not surprising that earrings were a standard accessory. Evidence of this can be found in the work of grave archaeologists, as many woman’s tombs have been discovered with small circular brooches at their shoulders which is assumed to have fastened earrings onto the women’s ears. The Vikings believed that such ornaments elevated them into the social sphere of the gods and goddesses. Viking art depicts both men and women wearing earrings, usually concentric circles representing the sun disks worn by ancient Celtic priests.

The Vikings were well known for their many types of earrings. Commonly, Viking women wore a series of intricately intertwined loops known as ‘Hennibul,’ though they were long and hanging in rare cases. These ornaments were typically made from gold and embellished with filigree, precious stones, and enamel. The production of these Hennibul may have been a family trade, with women assisting in their making.

Hennibul was considered the most prestigious type of earring to own, and it is believed that one such pair was included in the fabulous Borre Hoard discovered near the village of Vågan in Norway’s Lofoten Islands.

The most common type of Viking earring was the single significant drop that hung from the ear lobe, sometimes being decorated with spirals.

However, our knowledge of Vikings’ earrings is limited because they were typically removed when a woman entered a sacred space or when she died, making their archaeological discovery less likely.

Although Vikings are typically depicted with men wearing earrings, evidence proves that women also wore them.

The existence of these ornaments was considered to be a sign of high social status and power; only the wealthiest could afford such luxury items. It has been suggested that women most likely wore earrings when in the presence of men, considering Viking culture’s emphasis on gender segregation. Women wearing them would have been deemed ostentatious and immodest.

It has also been suggested that women only wore ornamental earrings while unmarried. A woman was expected to refrain from adornment after she was married or once she was of age, as it would be considered tawdry for a respectable woman to display her finery.

It has also been suggested that earrings were not worn by all women in Viking times, only those belonging to the upper class. It is more likely that they were an accessory used by everyone regardless of social status.

Though Vikings wore earrings for practical purposes such as fastening the earlobe, Vikings also used them in Viking culture to denote symbolism and convey messages. For example, a woman who wore an Hennibul may have intended to make a statement about her love and respect towards the gods and goddesses. Completing the Camilla Collett novels of Norwegian author Bjørnstjerne Bjørnson allows the returning reader to glimpse the symbolic significance of earrings in Viking culture.

Camilla is an island princess with high standards when it comes to men, but her heart is won over by a man named Erick, whom she later marries. During courtship, Erick gifts Camilla two gold Hennibul which are fastened onto her ears. These earrings symbolize his love for her and her appreciation of the gods. For the Vikings, communication was not limited to words or sounds; they used symbols instead, which can be seen.

In a nutshell, the Vikings are fashionistas and collectors of precious metals. They put forth a lot of effort to create elaborate decorations that blend in with everyday life. The Vikings were not the barbarians that almost all people believed them to be, but rather a well-organized society with developed social connections. They have a thriving culture that far outstrips that of most other areas at the period.