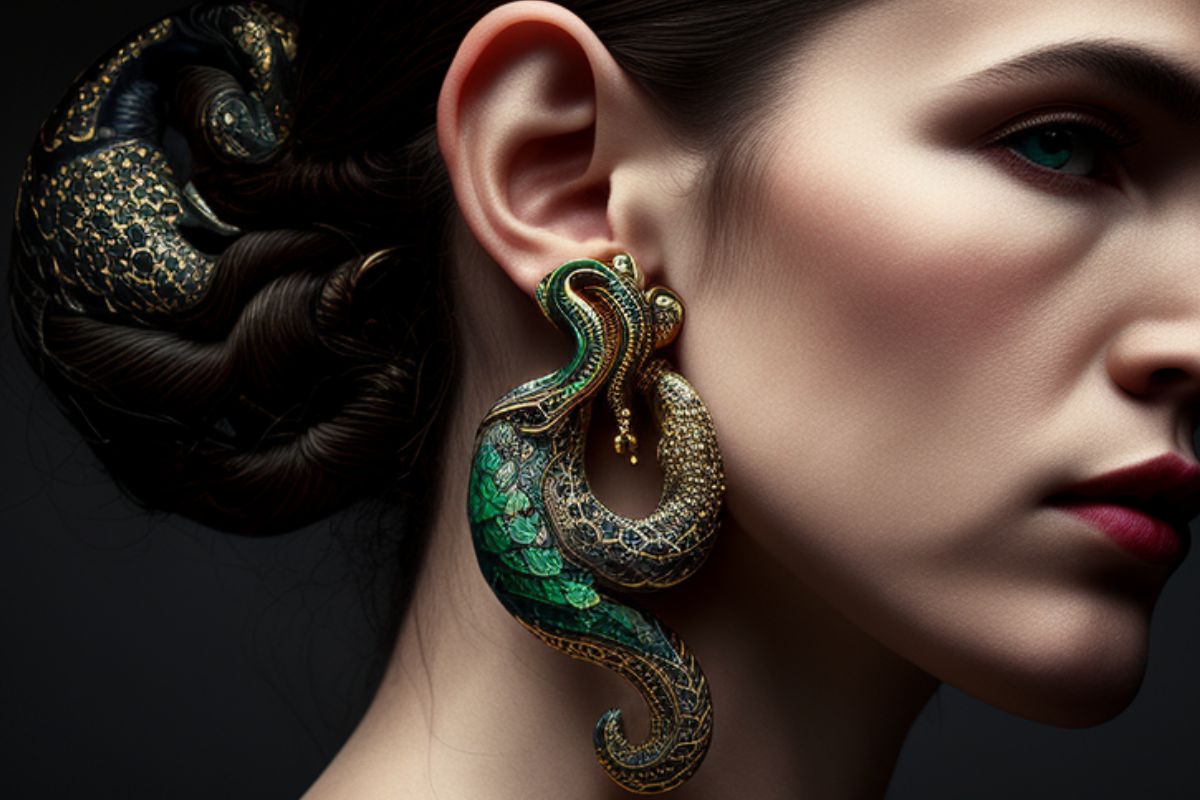 People nowadays often use snakes as a symbolic representation of their individuality. It’s become a part of people’s everyday style and can be found in a wide variety of places. There is a wide variety of snake-themed accessories and items available. The snake pattern is a timeless one in the world of fashion and design. Since the snake design has been around since ancient Egypt, it is not a trendy item. It’s a modern and distinctive sign.

Snake jewelry, with its one-of-a-kind appearance and the chic way designers have styled it, will never go out of style. Therefore, if you take good care of your snake jewelry, it may last you for many years. The topic of snake jewelry will be discussed today. Read on if you’re interested in discovering more about snake jewelry. 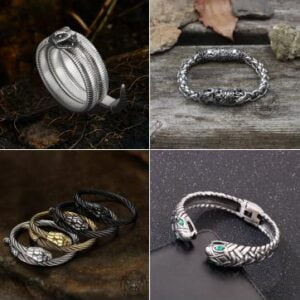 There is no way to speak about snake jewelry without discussing the queen who wore a snake ring on her finger on her wedding day. This snake ring was made specifically for Queen Victoria in 1840 by Prince Albert, who gave it to her as a symbol of their love. This ring has remarkable importance. It has a gold surface and stones are set into the center. It has a stately appearance. The outside ring is likewise intricately carved with designs, giving it a vibrant serpentine appearance. The queen would also wear a ring of this design, which was thought to protect its wearer from bad spirits despite its unsettling appearance. As a result of this wedding, snake jewelry became quite fashionable among both sexes. After then, they became a fashion statement in and of themselves.

Bracelets And Rings Made Of Snakes, Available For Men 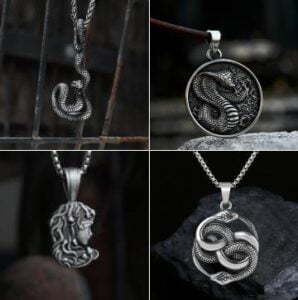 Jewelry with a snake motif dates back to the time of the ancient Egyptians, about 1600 BC. There is a wide variety of snake jewelry for guys to choose from. They’ve become a popular icon among snake enthusiasts everywhere. Snake enthusiasts have adorned their clothing and accessories with reptiles. 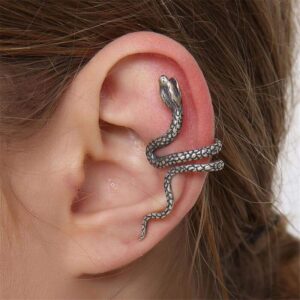 The ladies have an affinity with snake jewelry. Women coveted snake jewelry throughout the 19th century. The serpentine motif is versatile enough to be utilized in jewelry of many kinds. Jewelry shaped like snakes, such as rings, earrings, bracelets, and necklaces. When it came to nineteenth-century women’s fashion, however, it was the snake ring that reigned supreme. Wearing a snake ring with a snake bracelet, choker, or set of earrings is a terrific way to complete your ensemble.

Finding high-quality snake jewelry, however, is more difficult than it seems.

Given the size of the market for snake jewelry, there are several jewelry retailers that sell snake jewelry in a range of styles and pricing points. Therefore, it might be challenging to find reasonably priced, top-notch snake jewelry. There are a number of things to think about while looking for retail snake jewelry.

There are a variety of factors that are important to a variety of individuals. In general, the cost of jewelry is proportional to its quality. This is meant to convey the idea that if you want to purchase high-quality jewelry, you will need to shell out more money. Someone who is concerned about cost will prioritize finding affordable snake jewelry that will endure a long time.

Some shoppers are just interested in a bargain because they plan to wear their new piece of jewelry only once. Even yet, I think the vast majority of consumers would rather pay less for a product that is both high- and low-quality. Research is necessary before purchasing snake jewelry, and reputable retailers should be sought out.

The practice of praising animals as deities dates back to prehistoric times. Animal bones or tribal totems were carried for protection and power boosts. This is comparable to the animal-inspired jewelry that is popular nowadays. Today, let’s investigate the meaning of snake jewelry.

To make up for their ignorance, ancient peoples sometimes revered anything from plants to animals to gods and spirits. Snakes, being a class of strange creatures, are, of course, deserving of reverence. Snakes are revered as totems in many cultures and are the subjects of several stories and religious tenets. In the past, snakes were thought to possess mystical powers. In ancient Egypt, the cobra represented the goddess Wadjet. Numerous patterns and sculptures from various time periods include snakes as the primary shape, evidence of the widespread veneration of snakes throughout several continents, including India, Malaysia, and Africa. 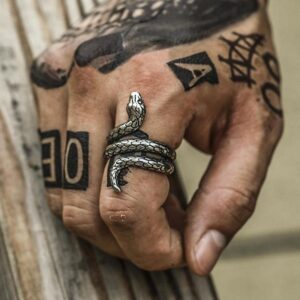 Snakes symbolize desire in European culture. In his book “The Interpretation of Dreams,” Freud used the snake as a metaphor for the male genitalia. The feathered snake appears more often in the works of the well-known author Lawrence, who is known for writing love scenes. The snake travels in a quiet and surprising way. This is analogous to the subconscious cravings of humans that sometimes burst through the barrier, which is why snakes are often associated with seduction. The book of Genesis in the Christian Bible tells the story of how the snake lured Eve and Adam the first humans, to consume the forbidden fruit that came from the tree that knew both good and evil. As a result, God cast the serpent out of paradise.

Throughout Western art history, the serpent has always been present in depictions of the idea of “original sin.” Medusa was indeed a gorgeous siren in Greek mythology with a hair full of deadly snakes, a deadly temptation that immediately turned anybody who gazed at her to stone. And even if you just see this pendant from the side, it has the power to make people go weak in the knees. However, it is covered with snake hair to serve as a constant reminder that she is a dangerous lady.

Pharaohs of ancient Egypt were identified by the cobra-shaped jewelry depicting the snake in an aggressive stance that adorned the crowns of their heads. A renowned ivory carving depicts a pharaoh with a snake firmly embedded in his walking staff. The European diplomats in B.C. engraved a picture of two snakes onto the scepter. The snake once again became a symbol of sovereignty and power when it was adopted as the scepter of international communication ambassadors. 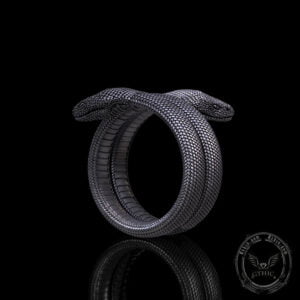 Snakes are revered as deities of water, creativity, and plenty throughout South Asia. The Hindu deity of water, fertility, and the serpent Naka takes the form of a serpent. The rattlesnake deity “Kukulcán” plays a significant role in the mythology surrounding the collapse of the maya civilisation in South America. For instance, in this ring, there are two snakes wrapped around a gemstone that looks like a treasure chest. The gemstone itself is a tanzanite.

Snake venom was often used by ancient shamans as a source for various poisons and hallucinogens. African bush tribesmen would catch poisonous snakes and use the snakes’ venom to coat spears and other weapons. In certain cultures who practiced witchcraft and sorcery, venomous snakes were employed to perform spells, and their deterring impact might transcend time and space. According to the myth, this necklace has magical properties since it incorporates a pentagram with a snake. 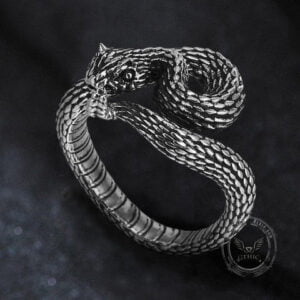 Whether or whether you believe the myths about them, snakes inspire universal terror due to the widespread belief that they are inherently dangerous, possess lethal venom, and are impossible to outrun. The Cerastes, the snake infamous for killing Cleopatra, is shown here in the form of a stainless steel snake ring. The Cerastes is easily recognizable by the pair of spiky horn scales that develop on each eye socket. 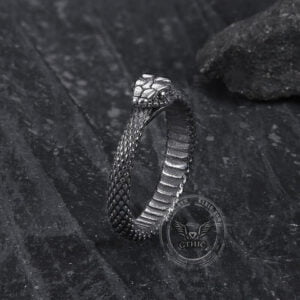 The Ouroboros is an old emblem that has been passed down through the ages. The metaphor depicts a serpent (or a dragon) consuming its own tail, so forming a ring in the process. The emblem of the snake biting and swallowing its own tail represents the spiritual embodiment of a view of the universe as a cycle, in which building and destroying are intertwined and life and death are cyclical.

The large snake must consume its own tail in order to maintain its ecological balance; conversely, the large snake’s tail provides it with an unending supply of food, constituting another another cyclic pattern of everlasting regeneration. He represents endless rebirth and cycles of knowledge and power.

The ancestors formerly held snakes in high esteem, even worshipping them. Snake culture still survives today, despite its past. The designers of snake jewelry incorporated aspects of many myths and stories into the design of the jewelry in order to provide an air of mystique to the pieces and provide the user with more options.

So, what are your thoughts on snake jewelry?

Please share your thoughts in the comments section below.